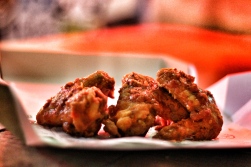 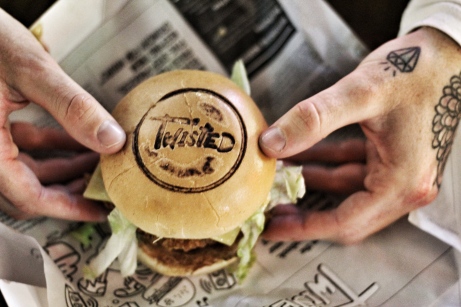 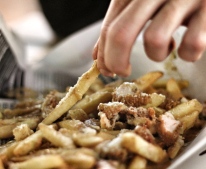 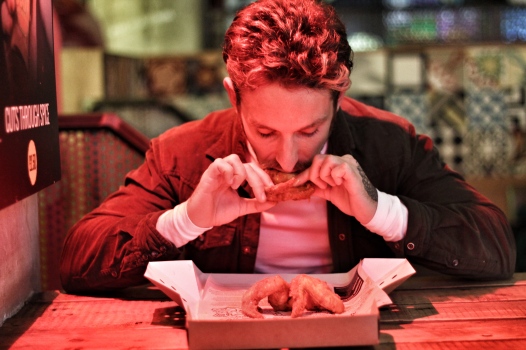 It has been 22 days since December and after inhaling everything and anything insight, I vowed that I would stay strong and get back on my strict regime, not just to strip the cosy layers of chub that have obstructed my previously hard cut abs, but for piece of mind. It’s always nice to have a regime in place to keep focus and know there is plan afoot. But then I was contacted by Twisted London and all my sincere plans went straight out of the metaphorical window, simply because; why not? It’s not very often you get a company as cool as twisted who ask you sample their delightful menu and as the lovely M.F.K Fisher once quoted;

“First we eat, then we do everything else”

So, as instructed, I put the regime to one side and indulged a little more and ate (maybe feasted is the more appropriate term) and I’m so glad I accepted the invite, because Twisted London is utterly incredible.

One thing that stood out on the Twisted menu was the harmonic mix of meat feasts and vegan treats, an equal balance to please a varied life-style choice and for someone who has made a concerted effort to weave vegetarian/vegan into my diet, this was a perfect excuse to try out some vegan burgers, it will have been my first experience of vegan ‘fast food’ and since indulging, it genuinely will not be my last.

Vegan variations included the ‘Hot Vegan’ a saucy mistress, created with panko crumbed vegan ‘chicken’, vegan chilli buffalo sauce, slaw, vegan ranch sauce & a vegan bun and the KFV, (which was the burger I opted to try) this filthy vegan number also had the panko crumbed vegan ‘chicken’, vegan cheese, avocado (my absolute fave) chilli jam, house vegan mayo, cos letter & a vegan bun and frankly, I speak only the truth, it was out of this world! If like me you’ve given vegan/vegetarian chicken alternatives a go from the supermarkets and feel sadly unsatisfied, then put your disappointment behind you and try this Twisted creation, they have developed the perfect balance of texture and flavour, producing a belter of a burger. It was moreish, fresh and damn right dirty, I may even call it a masterpiece, if I may be so bold!

In complete contrast and onto a meaty chapter, I gave the ‘Hashtag’ a go, deliciously fried buttermilk chicken, hash brown, sliced cheddar, shredded cos lettuce, devilled caesar dressing & a garlic butter bun. Yes. Yes. YESSSSSSS. It really packed a punch and the flavour of the crispy buttermilk & the crisp but soft hash brown was a divine collaboration. My beard paid the price, drenched in caesar dressing and vegan mayo, however, I excepted my fate and I was happy to look like one of the ‘Twits’ with a food filled tash & chin bristles, but I enjoyed myself way too much to care! Looking at the customers around us, they too were all enjoying their Twisted experience, slapping their tongues eagerly around their lips, licking away every morsel of flavour because when food tastes that good, it can’t be wiped away with a serviette, it has to be enjoyed!

Although tempted, me and Tom Sheard could not eat another crumb, however, the ‘Hot Swayze’ & ‘Chuck Boris’ looked tempting too. BUT since we also had the delicious caesar fries (which was a tray of tasty hand cut fries, fried chicken nuggets, bacon, parmesan with devilled caesar dressing) and a plate of HOT chicken wings to eat, we had to decline more food, but it definitely gave us more reason to return and try the rest of the menu, I mean, why wouldn’t I?

There was still the ‘Demon Vings’ to try (vegan wings) made from Seitan ‘chicken’ wings, vegan ghost chilli buffalo sauce, crispy shallots & coriander, the ‘Dirty Vegan Fries’ & of course the ‘Money Shot’ a 6oz beef patty (halal), panko crumbed Emmental cheese, smoked cheese sauce, chilli jam, parmesan all stacked perfectly amongst a soft brioche bun. If I was single (and on Tindr) I would have swiped right immediately, because this burger looked like a right SORT. However, it gives me an excuse to get this naughty beast ordered and enjoy at home.

Although we were able to sit and eat the food in trinity kitchen, the Twisted goodies are created in the Absurd Bird Kitchen and delivered through Uber Eats, so you can get these whopping great creations delivered straight to your door, perfect if your on a solo feast mission or having a group gathering, there is something on the menu for everyone, even a delicious caesar salad, with chicken thighs, pomegranate and spring onions, for those wanting to keep it a little lighter (with the option to dunk into caesar sauce, if you so desired).

The Twisted team were a delight to plan the visit through and the trinity kitchen team who created our grand cuisine (shout out to JB the Asburd Bird kitcehn manager who was the font of all knowledge when it came to the Twisted munch options!) overall we experienced a perfect taster menu and its left us begging for more!

I loved the concept of Twisted London, where they take burgers to new heights with some amazing concoctions, perfect for meat eaters and vegans alike, this is a must try for anyone in Leeds & London who fancy a next level munch, so what are you waiting for? get ordering now!